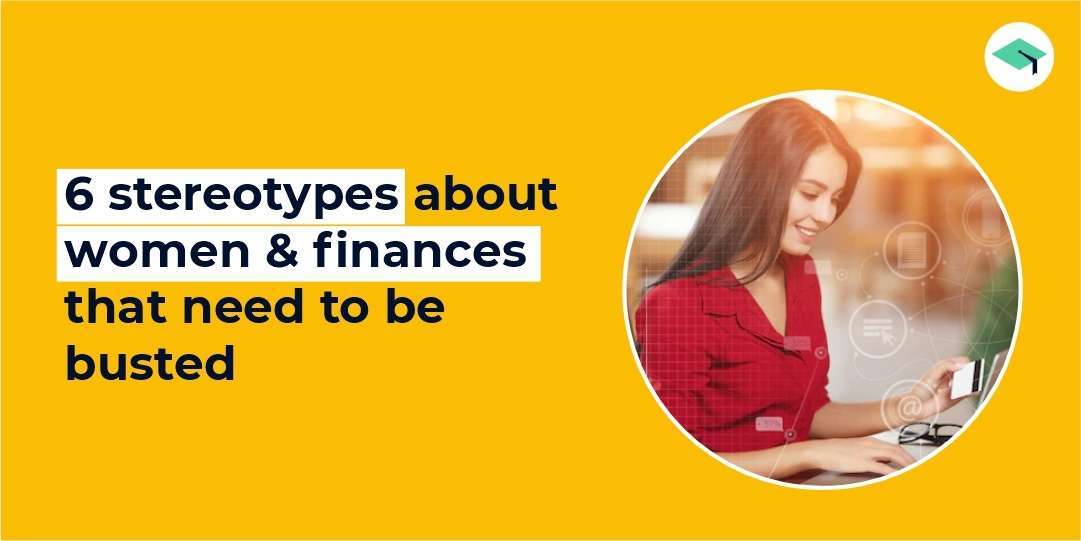 6 stereotypes about women and finances that need to be busted

Considering our patriarchal society, it was always believed that finances are best left to the men of our families. There is always a persistent gender gap between men and women regarding financial authority.

However, women are not free from stereotypes. One of the most apparent stereotypes against women is finances and numbers. Let’s bust the top 6 stereotypes about women and finances in this article!

Women are always believed to be big spenders when it comes to money. But it’s high time to accept that women are rational spenders.

In the older generations, when the “man of the family” used to be the breadwinner for the family, it was the woman (wife/mother) who used to save money on a daily and monthly basis.

We have grandmothers and mothers who still save every rupee inside their sarees in their wardrobes for emergencies.

Women are known to be the best financial managers. One thing that always helps them stay morally intact is their fear of wrongdoing by anyone.

Today, we can see Nirmala Seetharaman as the Finance Minister of India, who has drawn up excellent plans to promote the country’s economic growth and the welfare of society.

Arundhati Bhattacharya was the Chairman of the State Bank of India (SBI) and the youngest and first-ever woman to lead SBI in its over 210-year history.

And the list does not end here. Many financial leaders have taken their respective companies to the next level of growth.

Women are financially illiterate or bad with numbers

There is always an assumption that women cannot understand finances or numbers. Let me clear the numbers part for you first. Do you remember Shakuntala Devi? She was an Indian mental calculator and writer, popularly known as the “Human Computer”.

Now, let’s move on to the finances and investment part. It is often presumed that women cannot understand the basic SIP modes and invest in other instruments.

What is tricky about a SIP that only the latter gender can understand? Also, do not forget that it is Gita Gopinath, a woman who leads the International Monetary Fund. So, do you still think numbers are not our cup of tea?

Women are dependent on the men in their family

Whenever a woman is being married off, it is always said that the man will have to take care of all her financial, mental, or physical needs.

But it does not work that way. Both spouses are equal contributors to each other’s well-being. Even if the husband is the earning member of the family, the wife takes care of the house and nurtures the children.

She does not let even one single problem at home bother him. The wife morally supports and deeply motivates her husband every day so that he can stay focused at work.

However, women are more than capable of making financial decisions and managing money. They draw out a detailed budget based on the allowance that their husbands give them and their everyday expenses for the house.

Some women have set up massive empires like Vineeta Singh, Founder, and CEO of Sugar Cosmetics; Radhika Aggarwal, CBO of ShopClues and the first woman in India to enter the Unicorn Hub, Hemalatha Annamalai, CEO of Ampere Electric Pvt. Ltd developed an electric scooter even before Elon Musk entered the space of Electronic Vehicles.

But it is high time that we realized that women need investments in their name. They are entitled to insurance. They need to have SIPs set in their name and have good health insurance and term insurance plans.

Women’s role is only limited to domestic chores

Women have permanently been restricted to family life. It was always about getting married, taking care of the husband, having children, and then spending the rest of their lives bringing up their children.

The only financial decision they were allowed to make was bargaining with the subjiwala (vegetable seller).

They were only allowed to make financial decisions around everyday spending on the house with the limited allowance given to them by their husbands.

Women outperform men in 11 of 12 key emotional intelligence competencies, making them better workplace leaders. Obstacles like lack of financial independence, societal constraints, and stereotypes around womanhood prevent them from achieving their true potential.

But don’t let that stop you; Indra Nooyi did not have enough money and had to work her way through Yale School of Management to become the CEO of Pepsi Co! If she can, you can; start small and save whatever you can! Above all, have faith in your ability to shatter the glass ceiling.