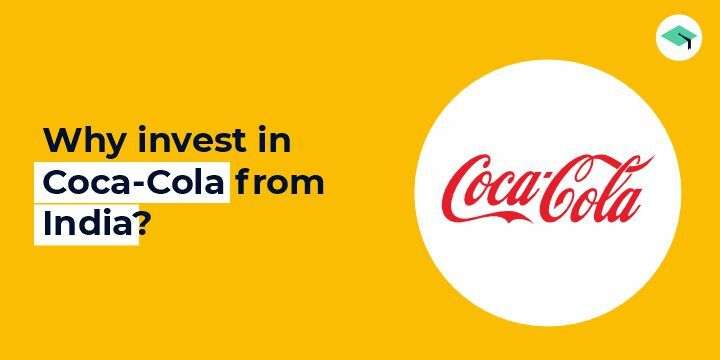 Why invest in coca-cola from India? All you need to know

As per Statista’s findings, “Coca-Cola is one of the top companies in the world by the market capitalization”. The name makes among the leading companies like – Apple, Alphabet, Tesla, and Amazon.

Market capitalization is a critical parameter considered in calculating a company’s worth and the trading opportunities it presents. Coca-Cola is considered one of the biggest companies in the world as per the market value index 2022.

Having such a high market capital ratio and being well-known for its “formula”, Coca-Cola shares opportunities for investors, particularly Indian.

Coca-Cola: One of the leading beverages Company in the World

Coca-Cola is a key beverage company in the world. Atlanta, Georgia, is the company’s headquarters. Globally, it has 200 bottling partners.

Coca cola’s net worth as per July 2022 statistics stands at $273.71 billion. There would be hardly any personality in the world who would fail to recognize the iconic letters describing the bottle. It is this aspect that captures the investor’s attention.

To talk about its bottles, have undergone constant evolution since 1886. It is the year that marked the invention of the iconic brand. The taste soon got popular in the UK and the brand became the first to cross the annual £1 grocery sales.

What does the Coca-Cola market benefit the most from?

Here is how its product segment contributes to the company’s growth:

What are the main motivations to invest in Coca-Cola than Pepsi from India?

Here are some popular reasons to invest in Coca from India in 2022:

Why does warren buffet love coca-cola so much?

Ever wondered why Warren Buffet’s Berkshire Hathway owns a 400 million or 9.2% stake in the company?

According to Business Insider’s statistics, Berkshire Hathway invested $1.3 billion investing in Coca-Cola. The price of Coca-Cola stock rose 2% in 2022. It is not it.

Additional read: How to invest in Netflix from India?

What is the Coca-Cola company’s share price in India in 2022?

Is it ideal to invest in Coca-Cola from India in 2022?

Here are some popular reasons to invest in Coca-Cola from India in 2022:

Undoubtedly, the stock will rise in the upcoming times and subside any US inflation fears.

Additional read: How to invest in Google from India?

How to invest in Coca-Cola from India?

Coca-Cola owns popular brands like- Minute Maid, Fanta, Maaza, and Coke Zero. You can invest in Coca-Cola from India in multiple ways:

1. Direct investment in the US stock

You can invest in Coca-Cola from a brokerage account in India. It is an account that holds financial securities or securities either with a bank, broker or custodian. Investors and traders hold accounts with the respective broker and the bank. They buy and sell stocks through the security account.

Another option through which you can invest in Coca-Cola is through ETF funds. An Exchange-Type Fund (ETF) is a pooled investment that works like a mutual fund. It tracks funds under index, commodity, asset, and sector.

It can be purchased and traded similarly to other stocks. ETF holds funds for different industries like- Household products, beverages, staples, food, etc. Some ETFs invest in US indexes. You can invest in Coca from India through ETFs of the US available in India.

It is one of the straightforward methods to invest in US Coca-Cola Stock. In this, you can invest in local mutual funds that share availability in the US.

One can invest in Indian Rupees. There are no restrictions to that. However, there may be a charge to invest in the stock from India. The fee is known as the Expense ratio.

These fees tend to be high. If you are a beginner investor, it might not be an ideal stock for you. It shares potential risks. However, the stock is performing well, but the fee makes investment costlier. Evaluate the risk appetite and invest in an informed manner.

As per the research, Coca-Cola stock is the stock of the “Future”. It certainly holds the potential for an investor to multiply his wealth.