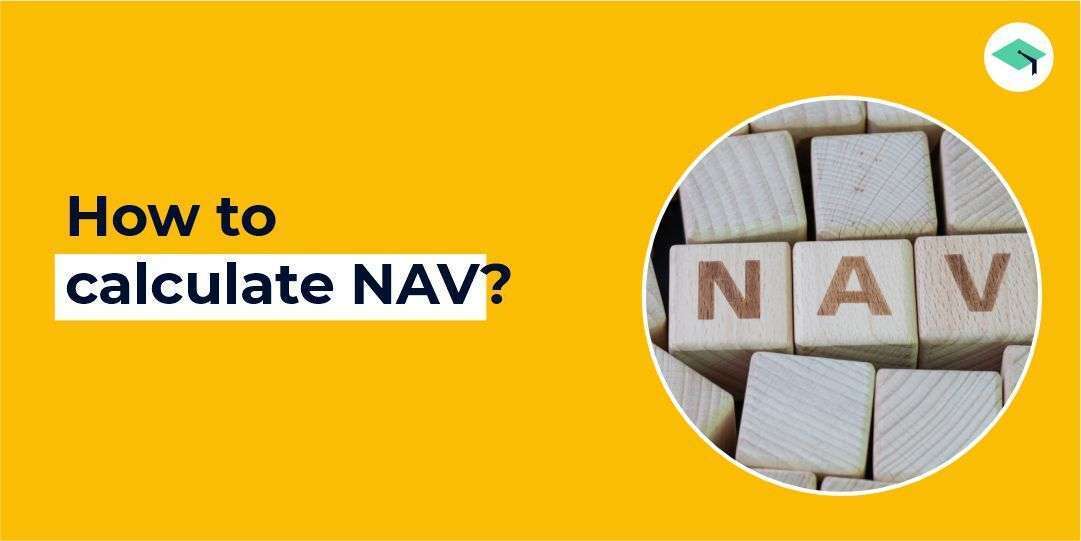 How to calculate NAV?

A mutual fund house hires an accounting firm that calculates the net asset value of the mutual fund. According to the SEBI guidelines, mutual funds must display their NAV publicly by regularly updating them on the AMFI and AMC websites on business days.

How to calculate NAV for a mutual fund?

The formula to calculate the NAV of a mutual fund is:

In the above formula, the TAV refers to the mutual fund investment’s market value and the accrued income, receivables less accrued expense, the outstanding creditor debts, liabilities, etc.

Direct plans offer a lower expense ratio while regular plans have a higher ratio. In direct plans, the investors manage their own investments by eliminating the middle man!

Generally, there are two categories of mutual fund assets:

This will give you the NAV. So, this is important to learn before calculating the mutual NAV using the given formula.

There is a difference between the total and net asset value of any mutual fund. The total asset value includes stocks, bonds, and cash. All of this is considered at the market value or the mutual fund’s closing price.

A mutual fund involves a variety of costs. The overall annual expenditures incurred by the mutual fund scheme are included in the expense ratio, which is deducted from the total asset value to determine NAV.

Its management fees, operating costs, transfer agent fees, custodian and audit fees, as well as distribution and marketing expenditures are all included in the expense ratio.

When is NAV calculated?

Since the price of the security, such as the stock or bonds, fluctuates often, the NAV of a mutual fund cannot be determined during stock market hours. NAV can be determined after the trading day has ended and the closing bell has rung. It is determined using the fund’s shares’ daily closing prices.

What does high and low NAV indicate?

Few distributors highlight the low NAV when offering the new fund offers. They make the investors believe that a low NAV will give them a high return.

But that’s where they mistake the NAV of the mutual fund with the company’s stock price. The low stock price indicates that it is available for a bargain price.

But the same rule cannot be applied to the NAV of the mutual fund. So, basically, you cannot judge how cheap or expensive a fund is by its NAV value.

NAV impacts only the quantity of units you receive. You receive fewer units from a mutual fund scheme with a high NAV, but the value of your investment stays the same. The mutual fund’s performance and your returns hold more value.

Difference between NAV and stock price

Many investors tend to confuse the mutual fund’s NAV with the stock market price. So, while you are investing in a mutual fund, you may think that a low net asset value would mean a low price; hence, it can be an excellent investment. But that’s precisely where you can get wrong.

The market price of a company’s stock and the NAV of a mutual fund is very different. Investors can purchase a firm’s shares once it is listed on the stock market.

As a result, the stock market price and book value are different.

Needless to mention that quite a few investors fail to understand the working of NAV. Thus, there could be a high chance of making the wrong investment choices.

Being an investor in a mutual fund, you need to properly understand how the NAV is connected to the fund’s performance. Some of the common myths associated with NAV:

Let’s say you put the same amount of money into two mutual fund plans with the same portfolios. You will receive more mutual fund units from the plan with the lower NAV. However, this does not imply that it is less expensive.

So, when you want to get more units, it may not always get you the highest returns. Therefore, the net asset value is not the best measure to identify whether or not the funds are expensive or cheap.

The example above demonstrates that whether the NAV is high or low doesn’t matter. The returns of two mutual funds with the same portfolio will be the same.

The NAV on any particular day won’t provide any information on a mutual fund’s potential for growth. Instead, it would help if you researched the fund’s NAV from recent times. You can predict how a fund will perform in the future by comparing these previous data points.

3. Book profits when the NAV rises

The NAV of a mutual fund should not be confused with the share price. When shares’ prices increase, a stock trader sells them to make a profit. Mutual funds don’t operate that way, though.

When the NAV rises, you can redeem fund units to leave an investment with promising long-term prospects. Additionally, you can keep hanging onto fund units whose NAVs are dropping or staying the same.

Before redeeming any units, consider the fund’s performance rather than just the NAV. It could be wise to keep investing in a fund if it performs well.

A mutual fund’s book value is its NAV. When making a mutual fund investment, you should focus on the fund’s performance rather than just its NAV. This may be accomplished by examining the fund’s historical results.

What is a good NAV for a mutual fund?

Suppose you are ready to invest in mutual funds and see that one has a NAV of 10 and another at 20. While you may want to opt for the former, it is good practice to consider factors like previous performance, AUM size, alpha, and beta.

How often is a NAV calculated?

After each trading day, an investment fund’s NAV is determined using the closing market values of the securities in its portfolio. NAV for companies might be seen as being close to book value. Shares of a company or fund may trade in the market at prices that differ from its NAV.

NAV will only affect the number of units you will receive. High NAV may give you fewer units but the investment value remains unchanged. Therefore, a high or low NAV reveals nothing about your investment’s future.